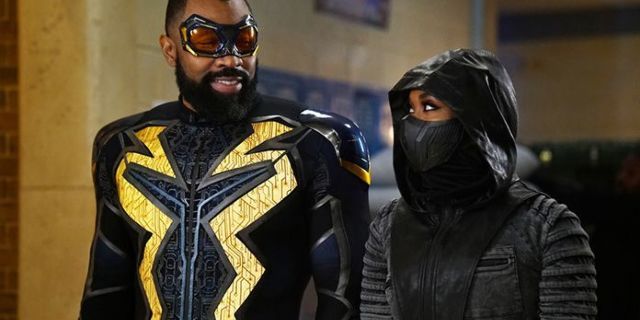 The CW has released official photos for “The Book of Markovia: Chapter One: Blessings and Curses Reborn,” the upcoming January 20th episode of Black Lightning. The episode marks the show’s return following the midseason break, but it also marks the first episode of the series following the network’s DC TV crossover event “Crisis on Infinite Earths” which saw Black Lightning join forces with the Arrowverse heroes for the first time. At this point, with “Crisis” wrapping up on January 14th, it’s not yet clear exactly how the event will impact Black Lightning, but it appears that some of the pre-Crisis threads will continue including the Markovian threat as well as Lynn Pierce’s struggles with addiction.

You can check out the official episode synopsis below.

The addiction storyline has been the biggest challenge for Lynn (Christine Adams) so far this season. She has been dealing with that while taking on the stress of working under the ASA and, recently, rescuing Tobias Whale.

“I don’t think Lynn has sort of really taken on that mother role like in the way she did in season one or two where she was kind of the glue of the family,” series star Christine Adams told reporters during a recent visit to the set. “You know, how she would always care about the girls or be concerned about the girls. I think she’s really focused on this cure for their metas and the pod kids. And I think that is what’s ultimately driving her. And I think there’s sort of an element of like, those kids are her kids in some way, but also she doesn’t like to not win. And I think she doesn’t like to fail. And I think everything that happened with those kids in season two and she lost 14 and that’s really driving her and I think she’s not really in her right mind to be thinking about those mothery instincts right now. She’s sort of a bit too far gone. And I think that’s also why her and Jeff are working well because he’s kind of like, ‘Lynn, we should be focusing on the girls and what they’re doing and they could be in danger and their choices.’ And she’s thinking, ‘I want to get these kids, bring them back to life.’ So there’s that divide there. So, you care more about kids in a pod than your own children. And at this point the answer is yes. So, I think Lynn the mother, that’s not there right now.”

Read on for photos from the episode.

Black Lightning airs Mondays at 9/8c on The CW. “The Book of Markovia: Chapter One: Blessings and Curses Reborn” airs January 20th.