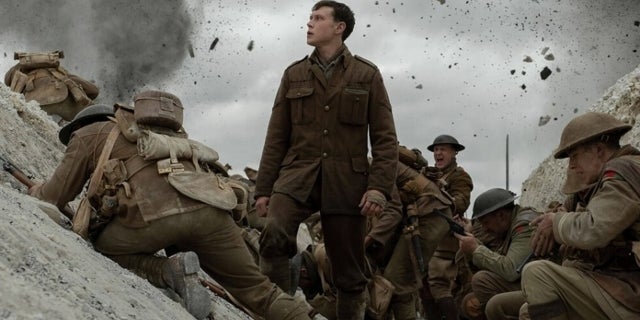 The ambitious new war movie 1917 is off to the races at the box office, with Deadline reporting that the film is on track to bring in between $12 million and $13 million for its first day in wide release. Thanks to this the film is looking at a weekend haul between $32 million and $35 million. It was reported earlier this week that the new film was outpacing Star Wars: The Rise of Skywalker in ticket sales, with the ninth episode in the main franchise eyeing at $17 million weekend and its first time below the #1 position at the domestic box office.

1917 centers on a pair of British World War I soldiers who are given a daunting assignment: to cross enemy lines and pass along an urgent message that could potentially save 1,600 of their comrades, among whom is one of the soldiers’ brother. The film was shot to look like a single, continuous shot with cameras moving alongside the two men as they race against time. We caught up with 1917 cinematographer Roger Deakins at New York Comic Con last year where the DP explained his challenges on shooting a war-time film set during the war to end all wars.

“The biggest challenge was to sort of have the camera connected to the characters so it was in the right place to tell the story, to get the right reactions, see the scenes, see the surroundings,” Deakins told ComicBook.com. “So it was like a big dance. It’s always that. Any film you do you’re figuring, oh where do we want to play this wide? Do we need to see a reaction? What is the best angle? But obviously here all that had to work as one. So it was very much for Sam to stage the action, and us to stage the camera in a sort of balletic way that each complemented the other.”

He added, “And the thing about doing something that long is it’s obviously a lot of complex choreography. And then the longer shot goes on, say if I’m operating on a remote stabilizer system, I’m sitting there, and Andy Harris, my focus puller, is sitting there and we’re all going… You get towards the end and you think, if anybody makes a mistake, then you’ve got all that other seven and a half minutes to go back and start again. And there might be explosions! So the pressure builds with the length of the shot. It’s interesting.”

1917 is now playing in theaters nationwide. A favorite for the Academy Awards,