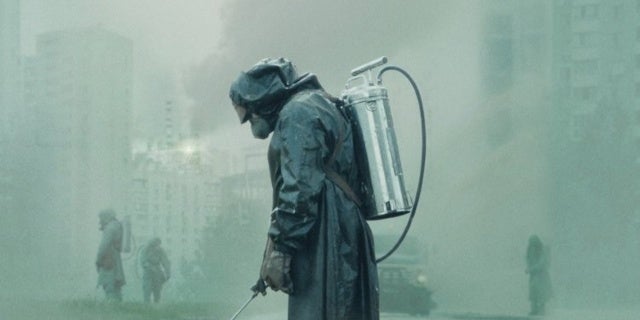 Over the last several years, IMDb users have been kind when rating HBO’s fantasy hit Game of Thrones. The series was rated one of the top TV shows in history on the site, with a few individual episodes earning ratings of 9.9. However, the final season of the series was despised by a majority of fans, causing the ratings to sink a little lower, and plenty of folks to consider cancelling their HBO subscriptions. Fortunately for the premium network, there wasn’t a lengthy period of time between Game of Thrones and its next critical darling. With one episode left to go, HBO’s limited series Chernobyl has not only passed the user ratings for Game of Thrones, but has just become the highest rated TV series on IMDb.

As of Wednesday morning, Chernobyl has an overall rating of 9.6 on IMDb, as voted by more than 75,000 users. Second on the overall list is Planet Earth II with a 9.5 rating. Four shows are tied at third with a 9.4 rating: Band of Brothers, Planet Earth, Breaking Bad, and Game of Thrones.

It’s likely that, if the final season of the series was as beloved by fans as the first seven, Game of Thrones could be sitting on top of the ladder. But a rushed collection of episodes over the last two months left a sour taste in the mouths of viewers, enough to wane their overall excitement about the series.

That said, Chernobyl is certainly winning over both fans and critics, with its gut-wrenching and powerful portrayal of the real life disaster. The five-episode series began airing on May 6th, and will conclude on June 3rd.

So far, each and every episode of Chernobyl has received wonderful individual ratings on IMDb. The first episode has earned a 9.5, while the three subsequent chapters have each received a 9.7.

Have you watched Chernobyl on HBO yet? What do you think of the new series? Let us know your thoughts in the comments section below!